Providing a relaxed, supportive, and educational atmosphere for those who are non-human identified.

You are not connected. Please login or register
2 posters 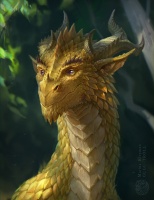 Many of us were raised with the idea that wolves naturally form packs in the wild and that the notion of "Alpha" and "Beta" wolves are actually a thing. The truth of the matter is that they aren't. When the original observations were made about wolf hierarchy, they were made regarding wolves that were in captivity. These wolves had no choice but to compete with each other. The stronger wolves ate first, mated first, and the lesser wolves took whatever was left over. This is an unnatural arrangement that doesn't typically happen in the wild. Furthermore, the ones who originally made those claims realized their error and tried in vain to clarify that their first observations were not based on wild wolves but the alpha/beta concepts had already taken hold.

What does happen in the wild are family units: A male, a female, and their off-spring (sometimes aunts will stay in the family). While I suppose you could still call it a pack, it's not a composition of outsider wolves vying for spots in a hierarchical order. No alpha. No beta. Just mom, dad, and off-spring. When the male off-spring get old enough to find mates of their own, they leave the family unit to set off to find their own mates to form families with.

So to all the wolf therians out there, choose your words wisely. If you believe you were in a "pack" in a past life, you were either a captive born wolf or you simply mean that you had brothers/sisters/mom/dad (family) and in that case, there's really no need to point it out.

For further reading, and better explanation with some rather comical pictures, read here http://www.sketchyscience.com/2014/08/the-alpha-myth-real-science-of-wolf.html﻿

Re: Debunking The Wolf Pack Myth

I knew about the myth of wolf packs, but I actually didn't know what happens when the kids grow up. Wolves have strength in numbers, so I was never sure if the kids just stayed around, or if they actually did break off and try to make their own family units. Thanks for finally answering that for me, Makar. :3
_________________
"Once you eliminate the impossible, whatever remains, however improbable, must be the truth."
-Arthur Conan Doyle
Current date/time is Tue Jan 31, 2023 11:09 am